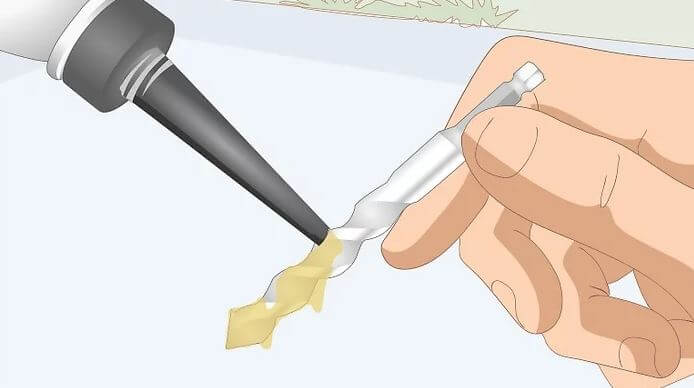 1. Fill in some lubricating oil to remove broken taps or drills.

Use a sharp hairpin or a chopper to tap the fracture surface in the opposite direction slowly, and pour the iron from time to time (the most common method in the workshop, but it is too small for threaded holes with the too-small diameter or broken taps). Long may be inappropriate, but you can try).

2. Weld a handle or hexagonal nut on the broken section of the tap, and then gently reverse it, then you can remove the broken taps. (it is a suitable method, but welding is a bit troublesome, or the same, it is not ideal for taps with smaller diameters).

The principle is that the workpiece and the tap are respectively connected with positive and negative electrodes, and the electrolyte is filled in the middle, which causes the workpiece to discharge corrosion to the tap, and then assist needle-nose pliers in taking out broken taps, which will cause little damage to the inner hole.

4. Use a small hammer to slowly tap the top of the steel roll on the tap crack to remove broken taps or drills.

The thread tap is relatively brittle, and finally, it becomes slag.

5. Weld the threaded hole where the broken taps rea located, grind it flat, and drill again.

Although it is difficult, you can drill in slowly (if the threaded hole can be changed position, re-drilling, and tapping, it is recommended to change To the original threaded hole).

6. Chisel a slot on the broken tap's cross-section, and use a screwdriver to reverse it (the slot is difficult to cut out, and it is even more complicated if the tap's diameter is small).

7. Drill the threaded hole of the broken taps to a large size, then inlay a wire thread insert or pin or something, then weld, grind, and re-drill and tap. It can be the same (this method is troublesome but very practical. , The tap's size does not matter).

8. Use electric pulse to knock out, EDM or wire cutting can be used, the hole can be reamed to add threaded wire sleeve (this method is simpler and more convenient, as for the coaxial, don't consider it for the time being, unless your threaded hole is the same Axial degree directly affects the quality of equipment).

9. Make a simple tool and insert it into the space of the chip groove of the broken taps section at the same time, and carefully pull it out in the opposite direction. For example, you can screw 2 nuts on the broken taps with a square tenon and use steel wire (the number of threads is the same as the number of tap grooves. )

11. Anneal the tap with an acetylene flame or a blowtorch, and then use a drill to drill. At this time, the drill diameter should be smaller than the diameter of the bottom hole, and the hole should be aligned to the center to prevent the thread from being damaged. After the hole is drilled, it is drilled into a flat shape, Or use a square punch to unscrew the tap with a wrench.

12. Use a pneumatic drill to reverse the extraction, depending on the feel, because the tap is not drilled directly, but with a slow speed and a little friction (similar to a car half-clutch) to make the tap turn out.

13. You can use a grinder to grind down the broken wire, use a small drill to drill first, and then gradually switch to a larger drill. The broken wire will gradually fall off. After falling off, use the original size of the tap to re-tap the tooth. The advantage can be without increasing the aperture.

14. Weld an iron rod on the broken-in object and then unscrew it. (Disadvantages: a. The cut-in is too small to be welded; b. It requires very high welding skills and is easy to burn the workpiece; c. The weld is easy to break, and the probability of taking out the broken-in is minimal.)

17. Directly use an electrode smaller than the cut-in object, and use an EDM machine to beat it. (Disadvantages: a. Useless for large workpieces cannot be put into the EDM machine table; b. Time-consuming; c. When it is too deep, it is easy to deposit carbon and cannot be hit.)

18. Use alloy drills to drill (disadvantages: an easy to destroy the original hole; b, useless for complex broken objects; c, alloy drills are more brittle and easy to break.)

However, the internal metal structure problem after welding is sometimes difficult to tap.

Also, you can check more about why thread taps break in the workpiece: 12 Causes of Thread Taps Break Analysis and Troubleshooting

Want to join the discussion?
Feel free to contribute!